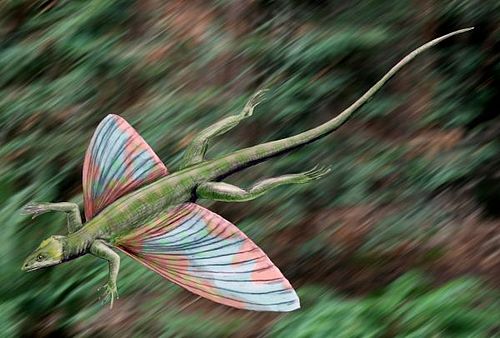 For the group of theropod dinosaurs, see Coelurosauria.

Coelurosauravus (meaning "hollow lizard grandfather") is a genus of basal diapsid reptile, with specialized wing-like structures allowing it to glide. These were rod like structures with skin stretched over them. These bony rods are not extensions of the ribs but are newly evolved dermal bones, a feature which is unique to the genus.

The average length of the specimens was 40 centimetres (16 in) and the body was long and flat, suitable for gliding. The skull was lizard-like with a pointed snout and contained a broad back with a serrated crest, superficially resembling the crests of ceratopsian dinosaurs. It lived during the Upper Permian (Lopingian) period in what is now Germany, England and Madagascar.