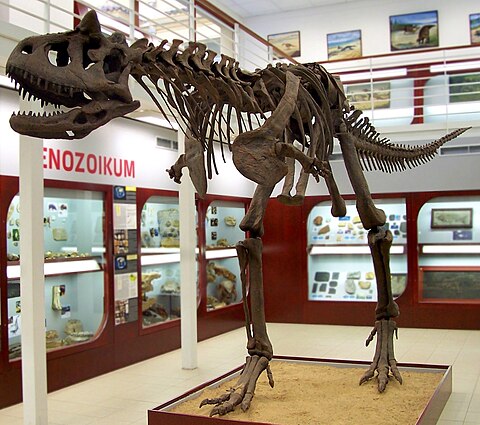 Carnotaurus is a genus of large theropod dinosaur that lived in South America during the Late Cretaceous period, between about 72 and 69.9 million years ago. The only species is Carnotaurus sastrei. Known from a single well-preserved skeleton, it is one of the best-understood theropods from the Southern Hemisphere. The skeleton, found in 1984, was uncovered in the Chubut Province of Argentina from rocks of the La Colonia Formation. Derived from the Latin carno [carnis] ("flesh") and taurus ("bull"), the name Carnotaurus means "meat-eating bull", an allusion to the animal's bull-like horns. Carnotaurus is a derived member of the Abelisauridae, a group of large theropods that occupied the large predatorial niche in the southern Landmasses of Gondwana during the late Cretaceous. The phylogenetic relations of Carnotaurus are uncertain; it might have been closer to either Majungasaurus or Aucasaurus.

Carnotaurus was a lightly built, bipedal predator, measuring 7.5 to 9 m (24.6 to 29.5 ft) in length and weighing at least 1.35 metric tons (1.33 long tons; 1.49 short tons). As a theropod, Carnotaurus was highly specialized and distinctive. It had thick horns above the eyes, a feature unseen in all other carnivorous dinosaurs, and a very deep skull sitting on a muscular neck. Carnotaurus was further characterized by small, vestigial forelimbs and long and slender hindlimbs. The skeleton is preserved with extensive skin impressions, showing a mosaic of small, non-overlapping scales approximately 5 mm in diameter. The mosaic was interrupted by large bumps that lined the sides of the animal, and there are no hints of feathers.

The distinctive horns and the muscular neck may have been used in fighting conspecifics. According to separate studies, rivaling individuals may have combated each other with quick head blows, by slow pushes with the upper sides of their skulls, or by ramming each other head-on, using their horns as shock absorbers. The feeding habits of Carnotaurus remain unclear: some studies suggest the animal was able to hunt down very large prey such as sauropods, while other studies find it preyed mainly on relatively small animals. Carnotaurus was well adapted for running and was possibly one of the fastest large theropods.