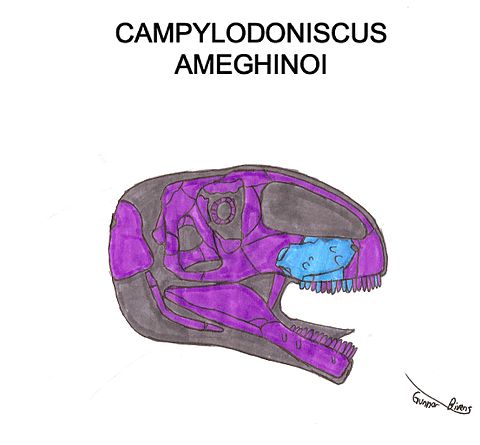 Campylodoniscus is a genus of sauropod dinosaur from the Late Cretaceous Period of what is now Argentina.

The type species was first named and described by Friedrich von Huene in 1929 as Campylodon ameghinoi, the genus name meaning 'bent tooth', from Greek kampulos, 'bent' or 'curved' (as of a bow) and odon meaning 'tooth'. The specific name honours Florentino Ameghino. In 1961 Oskar Kuhn noted that the name was pre-occupied by a fish and renamed the genus into Campylodoniscus, the diminutive.

The fossil remains of Campylodoniscus were found in the Sierra de San Bernardo and consist of a single jaw bone, the maxilla, holding seven teeth.

The age of Campylodoniscus could be from the Cenomanian, about 95 million years ago, or the Campanian-Maastrichtian, about 70 million years old. It is sometimes estimated as being around twenty meters in length.

Campylodoniscus is probably a member of the Titanosauria. Some researchers consider it a nomen dubium.