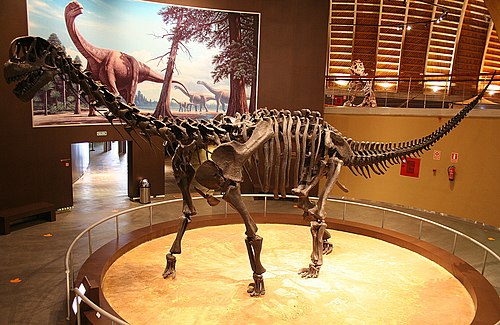 Camarasaurus ( KAM-a-ra-SAWR-as) was a genus of quadrupedal, herbivorous dinosaurs. It was the most common of the giant sauropods to be found in North America. Its fossil remains have been found in the Morrison Formation of Colorado and Utah, dating to the Late Jurassic epoch (Kimmeridgian to Tithonian stages), between 155 and 145 million years ago.

Camarasaurus presented a distinctive cranial profile of a blunt snout and an arched skull that was remarkably square. It likely travelled in herds, or at least in family groups.

The name means "chambered lizard", referring to the hollow chambers in its vertebrae (Greek kamara/kamara meaning "vaulted chamber", or anything with an arched cover, and sauros/sauros meaning "lizard").