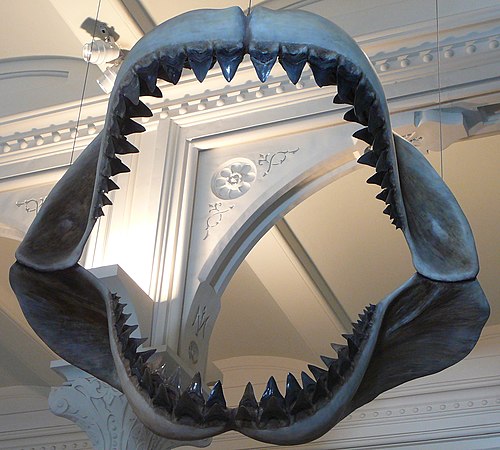 Megalodon (Carcharocles megalodon) ( MEG-a-la-don, MAY-ga-; meaning "big tooth", from Ancient Greek: megas (megas) "big, mighty" and odous (odous), "tooth"--whose stem is odont-, as seen in the genitive case form odontos, odontos) is an extinct species of shark that lived approximately 23 to 2.6 million years ago, during the Cenozoic Era (Early Miocene to the end of the Pliocene).

The taxonomic assignment of C. megalodon had been debated for nearly a century, but has recently reached consensus. In the past the two major interpretations were Carcharodon megalodon (under family Lamnidae) or Carcharocles megalodon (under the family Otodontidae). However recently, consensus has been reached that the latter view is correct and that megalodon is of the family Otodontidae deriving from sharks of the genus Otodus, and thus should be placed under the genus Carcharocles.

Regarded as one of the largest and most powerful predators in vertebrate history, C. megalodon probably had a profound impact on the structure of marine communities. Fossil remains suggest that this giant shark reached a length of 18 metres (59 ft), and also indicate that it had a cosmopolitan distribution. Scientists suggest that C. megalodon looked like a stockier version of the great white shark, Carcharodon carcharias.

The tooth of C. megalodon is the state fossil of North Carolina.