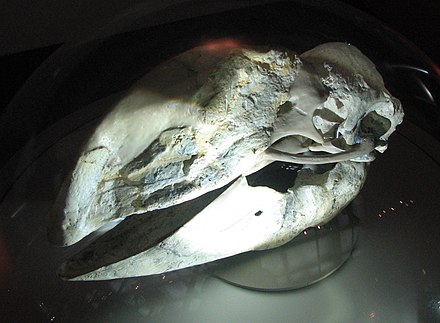 Bullockornis planei, nicknamed the Demon-Duck of Doom or Thunderbird, is an extinct flightless bird that lived in the Middle Miocene, approximately 15 million years ago, in what is now Australia.

Bullockornis stood approximately 2.5 metres (8 ft 2 in) tall. It may have weighed up to 250 kg (550 lb). Features of Bullockornis's skull, including a very large beak suited to shearing, have made some researchers consider that the bird may have been carnivorous, but most currently agree that it was a herbivore. The bird's skull is larger than that of many small horses.

Some paleontologists, including Peter Murray of the Central Australian Museum, believe that Bullockornis was related to geese and ducks. This, in addition to the bird's tremendous size and outdated carnivorous habits, gave rise to its colourful nickname. It may be somewhat inaccurate, however, as other studies have recovered dromornithids as more closely related to Galliformes.

The bird's generic name is improperly translated as "ox-bird", and was named instead for the type locality for the genus at Bullock Creek, Australia.