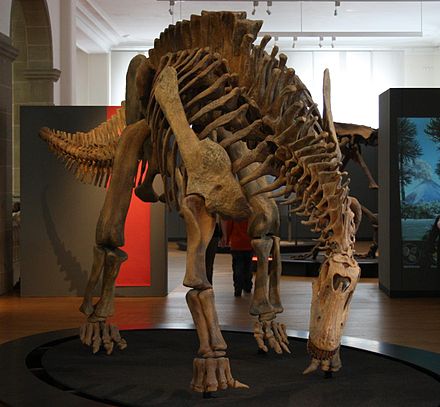 Brachytrachelopan is a short-necked sauropod dinosaur from the latest Jurassic Period (Tithonian) of Argentina. The holotype and only known specimen (Museo Paleontologico Egidio Feruglio MPEF-PV 1716) was collected from an erosional exposure of fluvial sandstone within the Canadon Calcero Formation on a hill approximately 25 km north-northeast of Cerro Condor, Chubut Province, in west-central Argentina, South America. Though very incomplete, the skeletal elements recovered were found in articulation and include eight cervical, twelve dorsal, and three sacral vertebrae, as well as proximal portions of the posterior cervical ribs and all the doral ribs, the distal end of the left femur, the proximal end of the left tibia, and the right ilium. Much of the specimen was probably lost to erosion many years before its discovery. The type species is Brachytrachelopan mesai. The specific name honours Daniel Mesa, a local shepherd who discovered the specimen while searching for lost sheep. The genus name translates as "short-necked Pan", Pan being the god of the shepherds.