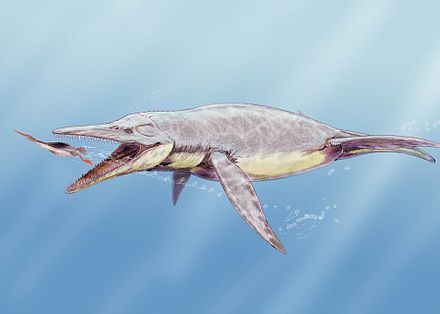 Brachauchenius (meaning 'short neck') is an extinct genus of pliosaurid that lived in North America (United States) during the Late Cretaceous.

The type species, Brachauchenius lucasi, lived in the Western Inland Sea of North America around 93.5-89.3 million years ago, during the Turonian stage of the Cretaceous. An older specimen from the Barremian of Colombia was considered as part of this genus, representing the first re-occurrence of the non-rhomaleosaurid pliosaurs after a Berriasian-Hauterivian hiatus. However, subsequent analysis of this Colombian specimen shows that it was enough distinctive to warrant a new genus and species, named as Stenorhynchosaurus munozi.

The first known (type) specimen (USNM 4989) was collected by Charles Hazelius Sternberg from Ottawa County, Kansas in 1884. It had a skull length of about 90 cm. The species was named by Samuel W. Williston. Brachauchenius represents the last known occurrence of a pliosaur in North America.

A larger specimen (FHSM VP-321 - skull length 170 cm) was collected by George Fryer Sternberg in 1952 from the Fairport Chalk of Russell County, Kansas, and later described by Carpenter. Schumacher and Everhart (2005) reported on the age and locality of both Kansas specimens. This pliosaur grew to around 10 meters (33 ft) in length. This specimen was reassigned to its own genus and species, Megacephalosaurus eulerti.