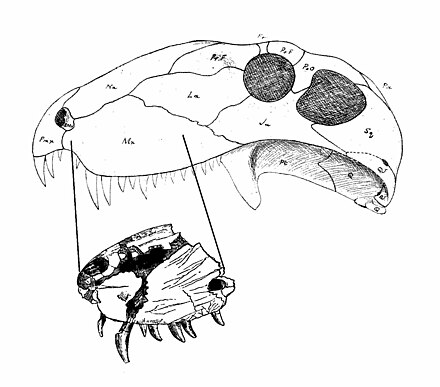 Dimetrodon borealis, formerly known as Bathygnathus borealis, is an extinct species of pelycosaur-grade synapsid that lived about 270 million years ago (Ma) in the Early Permian. A partial maxilla or upper jaw bone from Prince Edward Island in Canada is the only known fossil of Bathygnathus. The maxilla was discovered around 1845 during the course of a well excavation in Spring Brook in the New London area and its significance was recognized by geologists John William Dawson and Joseph Leidy. It was originally described by Leidy in 1854 as the lower jaw of a dinosaur, making it the first purported dinosaur to have been found in Canada, and the second to have been found in all of North America (the first was Clepsysaurus from Pennsylvania, now known to be a phytosaur rather than a dinosaur). The bone was later identified as that of a pelycosaur. Although its current classification as a sphenacodontid synapsid was not recognized until after the discovery of its more famous relative Dimetrodon in the 1870s, Bathygnathus is notable for being the first discovered sphenacodont. A 2015 study by the researchers from U of T Mississauga, Carleton University and the Royal Ontario Museum reclassified the species into the genus Dimetrodon.