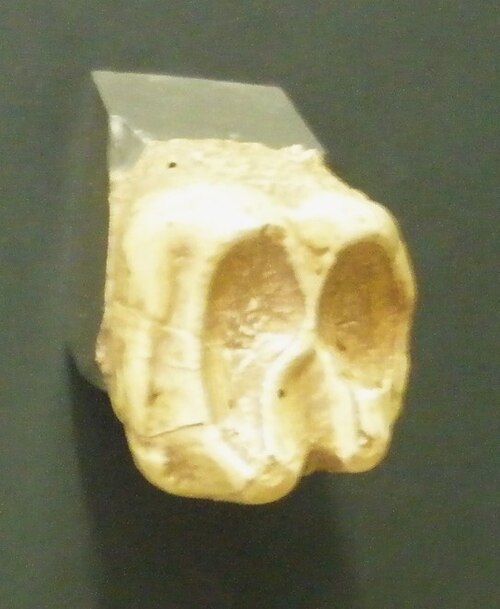 Barytherium (meaning heavy beast) is a genus of an extinct family (Barytheriidae) of primitive proboscidean that lived during the late Eocene and early Oligocene in North Africa. The Barytheriidae were the first large size proboscideans to appear in the fossil records and were characterized by a strong sexual dimorphism. It was about 1.8-2 m tall at the shoulder and weighed about 2 tonnes.

The only known species within this family is Barytherium grave, found at the beginning of the 20th century in the Fayum, Egypt. More complete specimens have been found since then, at Dor el Talha, Libya and most recently at the Aidum area in Oman. In some respects, these animals would have looked similar to a modern Asian Elephant, but with a more slender build. The most visible difference, however, would have been the tusks. Barytherium had eight very short tusks, four each in the upper and lower jaws, which resembled those of a modern hippopotamus more than those of an elephant. The upper pairs were vertical, while the lower pairs projected forwards from the mouth horizontally. Together, these would have created a shearing action for cropping plants.

Barytherium fossils were discovered in 2011 in the Aidum area in Dhofar by Oman's Ministry of Heritage and Culture and brought to Sultan Qaboos University (SQU) for identification. The team included Professor Sobhi Nasir and Dr. Abdulrahman al Harthy from SQU and Dr. Erick Seifert from SUNY Stony Brook, New York. The scientists named the new finding Barytherium omansi.