BALAUR
(ba-la-ur)
meaning: "After a dragon in Romanian folklore" 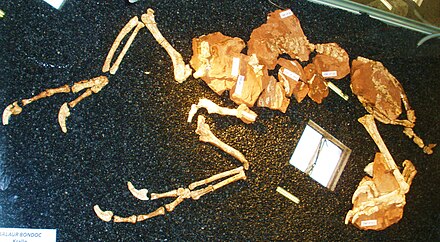 Balaur bondoc is a species of theropod dinosaur which lived in what is now Romania during the late Cretaceous period. It is the type species of the monotypic genus Balaur which was described by scientists in August 2010, and was named after the balaur (Romanian pronunciation: [ba'la.ur]), a dragon of Romanian folklore. The specific name bondoc means "stocky", so Balaur bondoc means "stocky dragon" in Romanian. This name refers to the greater musculature that Balaur had compared to its relatives. The genus is known from two partial skeletons including the type specimen.

Seventy million years ago, world sea levels were higher, and the location where its fossils are found was a part of the European Archipelago called Hateg Island which is also referred to as the "Island of the Dwarf Dinosaurs". Unlike other early members of the group Paraves, which includes Velociraptor, Troodon, and Archaeopteryx, this theropod had not just one but two large, retractable, sickle-shaped claws on each foot, and its limbs were proportionally shorter and heavier than those of its relatives. As with other dinosaurs from Hateg, such as Magyarosaurus, a dwarf sauropod, its strange features have been argued to show the effects of its island habitat on its evolution.