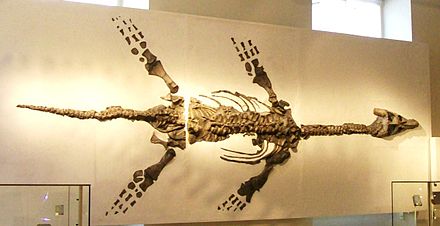 Atychodracon is an extinct genus of rhomaleosaurid plesiosaurian known from the Late Triassic - Early Jurassic boundary (probably early Hettangian stage) of England. It contains a single species, Atychodracon megacephalus, named in 1846 originally as a species of Plesiosaurus. The holotype of "P." megacephalus was destroyed during a World War II air raid in 1940 and was later replaced with a neotype. The species had a very unstable taxonomic history, being referred to four different genera by various authors until a new genus name was created for it in 2015. Apart from the destroyed holotype and its three partial casts (that survived), a neotype and two additional individuals are currently referred to Atychodracon megacephalus, making it a relatively well represented rhomaleosaurid.