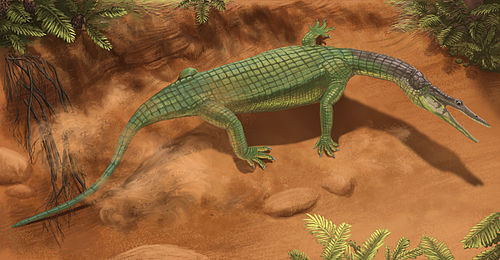 Archeopelta is an extinct genus of carnivorous archosauriform from the late Middle or early Late Triassic period (late Ladinian to early Carnian stage). It was a 2 m (6 ft) long doswelliid predator which lived in what is now southern Brazil.

It is known from the holotype CPEZ-239a, which consists of partial skeleton and braincase. It was found in the Santa Maria 1 Sequence, previously known as the Santa Maria Formation, in Xiniqua region, Sao Pedro do Sul of Rio Grande do Sul State. It was first named by Julia B. Desojo, Martin D. Ezcurra and Cesar L. Schultz in 2011 and the type species is Archeopelta arborensis. The generic name comes from archeo, ancient in Greek and pelta, armoured, in reference to its thick osteoderms. The specific name is derived from arbor, tree in Latin, in reference to Sanga da Arvore where the fossils were found.