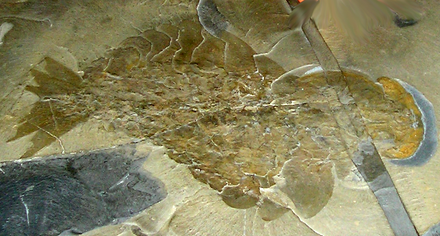 Anomalocaris ("abnormal shrimp") is an extinct genus of anomalocaridid, a family of animals thought to be closely related to ancestral arthropods. The first fossils of Anomalocaris were discovered in the Ogygopsis Shale by Joseph Frederick Whiteaves, with more examples found by Charles Doolittle Walcott in the famed Burgess Shale. Originally several fossilized parts discovered separately (the mouth, feeding appendages and tail) were thought to be three separate creatures, a misapprehension corrected by Harry B. Whittington and Derek Briggs in a 1985 journal article.