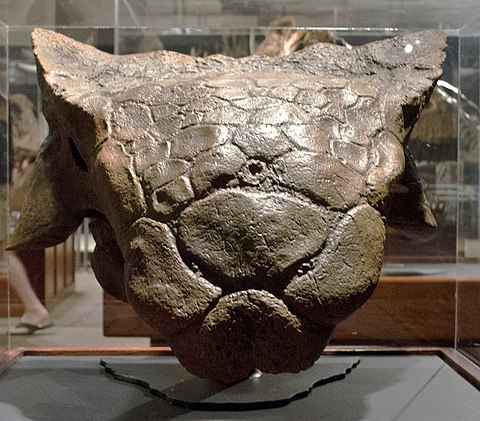 Ankylosaurus ( ANG-ka-lo-SAWR-as) is a genus of armored dinosaur. Fossils of Ankylosaurus have been found in geological formations dating to the very end of the Cretaceous Period, between about 68-66 million years ago, in western North America, making it among the last of the non-avian dinosaurs. It was named by Barnum Brown in 1908, and the only species classified in the genus is A. magniventris. The genus name means "fused lizard" and the specific name means "great belly". A handful of specimens have been excavated to date, but a complete skeleton has not been discovered. Though other members of Ankylosauria are represented by more extensive fossil material, Ankylosaurus is often considered the archetypal member of its group.

The largest known ankylosaurid, Ankylosaurus measured up to 6.25 m (20.5 feet) in length, 1.7 m (5.6 feet) in height, and weighed 3.65 tonnes (8,000 lb). It was a quadrupedal animal, with a broad, robust body. It had a wide, low skull, with two horns pointing backwards from the back of the head, and two horns below these that pointed backwards and down. The front part of the jaws were covered in a beak, with rows of small, leaf-shaped teeth further behind it. It was covered in armor plates, or osteoderms, with bony half-rings covering the neck, and had a large club on the end of its tail. Bones in the skull and other parts of the body were fused, increasing their strength, and this feature is the source of the genus name.

Ankylosaurus is a member of the family Ankylosauridae, and its closest relatives appear to be Anodontosaurus and Euoplocephalus. Ankylosaurus is thought to have been a slow moving animal, able to make quick movements when necessary. Its broad muzzle indicates it was a non-selective browser. Sinuses and nasal chambers in the snout may have been for heat and water balance or played a role in vocalization. The tail club is thought to have been used in defense against predators or in intraspecific combat. Ankylosaurus has been found in the Hell Creek, Lance, and Scollard formations, but appears to have been rare in its environment. Although it lived alongside a nodosaurid ankylosaur, their ranges and ecological niches do not appear to have overlapped, and Ankylosaurus may have inhabited upland areas. Ankylosaurus also lived alongside dinosaurs such as Tyrannosaurus, Triceratops, and Edmontosaurus.