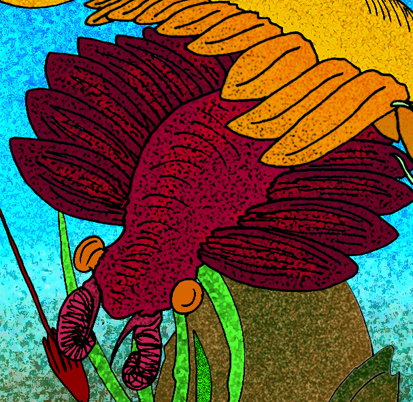 Amplectobelua is an extinct genus of late Early Cambrian anomalocaridid, a group of stem arthropods that lived as free-swimming predators during the first half of the Paleozoic Era. Like other anomalocaridids, Amplectobelua had a pair of jointed grasping appendages, large eyes, a limbless body, and a series of fins or swimming lobes on both sides that extended along the length of its body. It was smaller than the related Anomalocaris, however, and had a specialized grasping appendage, in which the spine on the fourth segment hooked forward to oppose the tip of the appendage, allowing it to grasp prey like the pincer of a crab. The fins differ as well; the front fins are very long and slender, while the middle pair of tail fins are specialized into a pair of long streamers, or furci.