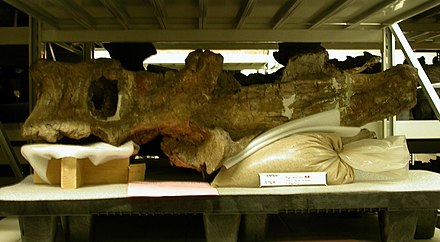 Amphicoelias (, meaning "biconcave", from the Greek amphi, amphi: "on both sides", and koilos, koilos: "hollow, concave") is a genus of herbivorous sauropod dinosaur. It includes what has sometimes been estimated to be the largest dinosaur specimen ever discovered, originally named "A. fragillimus". Based on surviving descriptions of a single fossil bone, scientists had over the years estimated A. fragillimus to have been the longest known animal at 58 metres (190 ft) in length, with potentially a mass of up to 122.4 tonnes (134.9 short tons). However, because the only fossil remains were lost at some point after being studied and described in the 1870s, evidence survived only in drawings and field notes. More recent analysis of the surviving evidence, and the biological plausibility of such a large land animal, has suggested that the enormous size of this animal were over-estimates due partly to typographical errors in the original 1878 description.