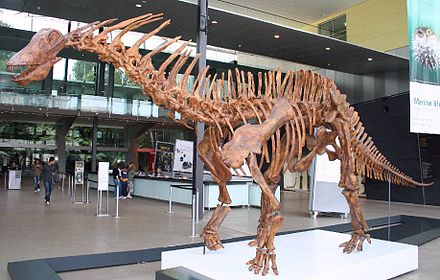 Amargasaurus ("La Amarga lizard") is a genus of sauropod dinosaur from the Early Cretaceous epoch (129.4-122.46 mya) of what is now Argentina. The only known skeleton was discovered in 1984 and is virtually complete, including a fragmentary skull, making Amargasaurus one of the best-known sauropods of its epoch. Amargasaurus was first described in 1991 and contains a single species, Amargasaurus cazaui. It was a large animal but small for a Sauropod , reaching 9 to 10 meters (30 to 33 feet) in length. Most distinctively, it sported two parallel rows of tall spines down its neck and back, taller than in any other known sauropod. In life, these spines most likely could have stuck out of the body as solitary structures that supported a keratinous sheath. An alternate hypothesis, now less favored, postulates that they could have formed a scaffold supporting a skin sail. They might have been used for display, combat, or defense.

Amargasaurus was discovered in sedimentary rocks of the La Amarga Formation, which dates back to the Barremian and late Aptian stages of the Early Cretaceous. A herbivore, it shared its environment with at least three other sauropod genera, which might have exploited different food sources in order to reduce competition. Amargasaurus probably fed at mid-height, as shown by the orientation of its inner ear and the articulation of its neck vertebrae, which suggest a habitual position of the snout some 80 centimeters (31 inches) above the ground and a maximum height of 2.7 meters (8.9 feet). Within the Sauropoda, Amargasaurus is most closely related to the Late Jurassic genera Dicraeosaurus, Brachytrachelopan and Suuwassea. Together, these genera form the family Dicraeosauridae, which differs from other sauropods in showing shorter necks and smaller body sizes.