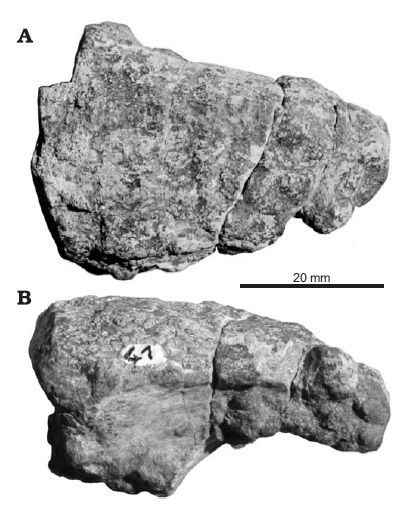 Alierasaurus is an extinct genus of caseid synapsid that lived during the Permian in what is now Sardinia. It is represented by a single species, the type species Alierasaurus ronchii. Known from a very large partial skeleton found within the Cala del Vino Formation, Alierasaurus is one of the largest known caseids. It closely resembles Cotylorhynchus, another giant caseid from the Middle Permian San Angelo Formation in Texas. In fact, the only anatomical features that differ between Alierasaurus and Cotylorhynchus are found in the bones of the feet; Aleirasaurus has a longer and thinner fourth metatarsal and it has ungual bones at the tips of the toes that are pointed and claw-like rather than flattened as in other caseids. Aleirasaurus and Cotylorhynchus both have very wide, barrel-shaped rib cages indicating that they were herbivores that fed primarily on high-fiber plant material.