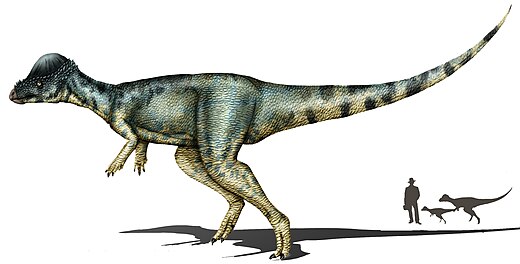 Alaskacephale was a genus of pachycephalosaurid dinosaur that lived in the late Campanian to Maastrichtian stages of the Late Cretaceous (around 80 to 69 million years ago).

Alaskacephale was named by Robert Sullivan in 2006. The genus name refers to Alaska, where the fossil was found in the Prince Creek Formation. The species name, gangloffi, honors paleontologist Roland Gangloff. The only known specimen of A. gangloffi is the holotype, a nearly complete left squamosal with a characteristic array of polygonal nodes. The dimensions of this bone suggest that A. gangloffi was about half the size of Pachycephalosaurus wyomingensis or three quarters the size of Prenocephale, and about the same size as "Prenocephale" edmontonensis and Foraminacephale.