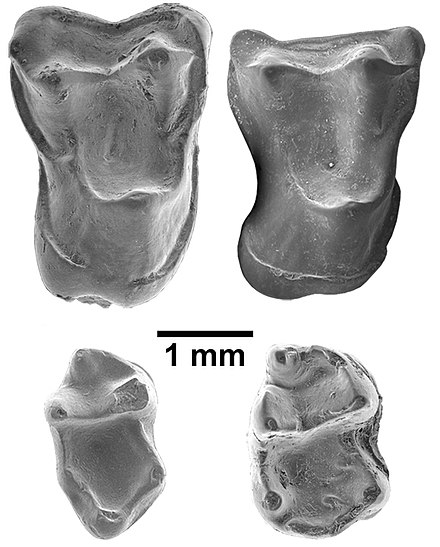 Afrasia djijidae is a fossil primate that lived in Myanmar approximately 37 million years ago, during the late middle Eocene. The only species in the genus Afrasia, it was a small primate, estimated to weigh around 100 grams (3.5 oz). Despite the significant geographic distance between them, Afrasia is thought to be closely related to Afrotarsius, an enigmatic fossil found in Libya and Egypt that dates to 38-39 million years ago. If this relationship is correct, it suggests that early simians (a related group or clade consisting of monkeys, apes, and humans) dispersed from Asia to Africa during the middle Eocene and would add further support to the hypothesis that the first simians evolved in Asia, not Africa. Neither Afrasia nor Afrotarsius, which together form the family Afrotarsiidae, is considered ancestral to living simians, but they are part of a side branch or stem group known as eosimiiforms. Because they did not give rise to the stem simians that are known from the same deposits in Africa, early Asian simians are thought to have dispersed from Asia to Africa more than once prior to the late middle Eocene. Such dispersals from Asia to Africa also were seen around the same time in other mammalian groups, including hystricognathous rodents and anthracotheres.

Afrasia is known from four isolated molar teeth found in the Pondaung Formation of Myanmar. These teeth are similar to those of Afrotarsius and Eosimiidae, and differ only in details of the chewing surface. For example, the back part of the third lower molar is relatively well-developed. In the Pondaung Formation, Afrasia was part of a diverse primate community that also includes the eosimiid Bahinia and members of the families Amphipithecidae and Sivaladapidae.