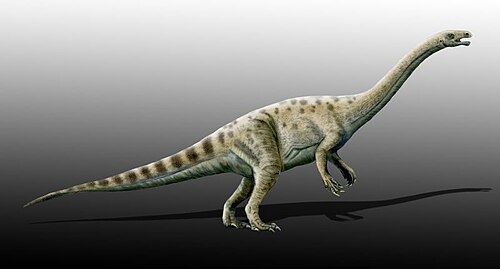 Adeopapposaurus (meaning "far eating lizard", in reference to its long neck) is a genus of prosauropod dinosaur from the Early Jurassic Canon del Colorado Formation of San Juan, Argentina. It was similar to Massospondylus. Four partial skeletons with two partial skulls are known.

The type specimen, PVSJ568, includes a skull and most of a skeleton to just past the hips. The form of the bones at the tips of the upper and lower jaws suggests it had keratinous beaks. The fossils now named Adeopapposaurus were first thought to represent South American examples of Massospondylus; while this is no longer the case, Adeopapposaurus is classified as a massospondylid. Adeopapposaurus was described in 2009 by Ricardo N. Martinez. The type species is A. mognai, referring to the Mogna locality where it was found.