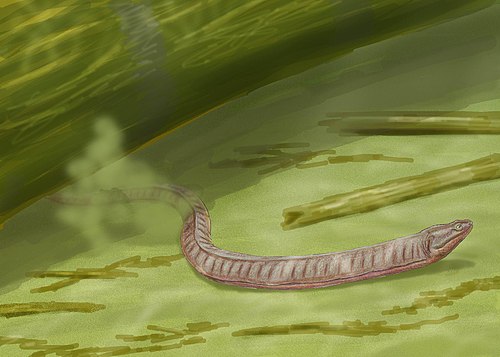 Adelospondylus is an extinct lepospondyl amphibian. Distinct from Doleserpeton, the skull of Adelospondylus was lower with a deeper mandible. The jawline was convex ventrally. The orbit was smaller, further forward and elevated relative to the top of the skull. The postorbital portion of the skull was elongated. The squamosal indentation was shifted posteriorly to above the jaw joint. The maxilla was not raised anteriorly. The postorbital and jugal were fused. A new bone, or the reappearance of the intermedium, appeared on the skull roof asymmetrically. In dorsal view the skull was triangular in shape, distinct from the more oval shape in Doleserpeton. Only the skull is known of this genus, but related taxa have very elongated, caecilian-like bodies with tiny limbs.