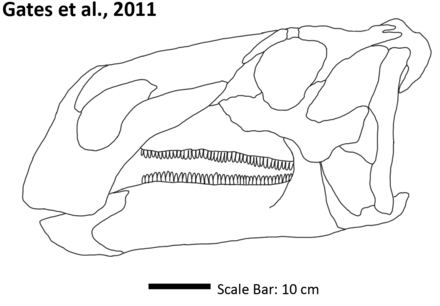 Acristavus is a genus of saurolophine dinosaur. Fossils have been found from the Campanian Two Medicine Formation in Montana and Wahweap Formation in Utah, United States. The type species A. gagslarsoni was named in 2011. Unlike nearly all hadrosaurids except Edmontosaurus, Acristavus lacked ornamentation on its skull. The discovery of Acristavus is paleontologically significant because it supports the position that the ancestor of all hadrosaurids did not possess cranial ornamentation, and that ornamentation was an adaptation that later arose interdependently in the subfamilies Saurolophinae and Lambeosaurinae. It is closely related to Brachylophosaurus and Maiasaura, and was assigned to a new clade called Brachylophosaurini.