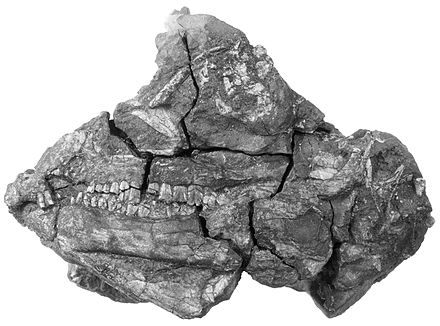 Abrictosaurus ("wakeful lizard") is a genus of heterodontosaurid dinosaur from the Early Jurassic Period of what is now southern Africa. It was a small bipedal herbivore or omnivore, approximately 1.2 meters (4 feet) long, and weighing less than 45 kilograms (100 pounds).

This dinosaur is known from the fossil remains of only two individuals, found in the Upper Elliot Formation of Qacha's Nek District in Lesotho and Cape Province in South Africa. The Upper Elliot is thought to date from the Hettangian and Sinemurian stages of the Early Jurassic Period, approximately 200 to 190 million years ago. This formation is thought to preserve sand dunes as well as seasonal floodplains, in a semiarid environment with sporadic rainfall. Other dinosaurs found in this formation include the theropod Megapnosaurus, the sauropodomorph Massospondylus, as well as other heterodontosaurids like Heterodontosaurus and Lycorhinus. Remains of terrestrial crocodylomorphs, cynodonts and early mammals are also abundant.